Annie (OK, her real name is Adrienne, but you can call her Annie.  Or Adrienne.  Or A :-)) has been actively growing African violets since the mid-1990s.

Her first attempt was back in the wayback, when she was in college.  Someone gave her a leaf to root, which promptly rotted.  Her second attempt was a gift she could never get to bloom a second time.  The third time was the charm: a violet rescue from a Jewel grocery store in Chicagoland, the discovery of the African Violet Society of America (AVSA), and the advent of the Internet, set Annie on the path to growing and showing her plants.

There are violets in the guest room, violets in the basement, and violets in the sunroom.  There is, occasionally, even a violet or two in the kitchen.  A 🙂 has moved them across the country.  More than once. Besides the violets, Adrienne is an avid knitter and spinner, and she plays the bagpipes.

If you’re a knitter or fiber artist, she is Annie97 on Ravelry, where she is one of the moderators of its African Violets Anonymous group.

About the Podcast
All About African Violets came about as a direct result of my starting over.  On Tuesday, June 5, 2012, the night before I left for the 2012 AVSA National Convention and after a perfect storm of mishaps, I found myself starting over with African violets.  I had just come up from the basement stands and was standing in front of the stands in my guest room with a big black trash bag.  Out they all went, one after another, pots and all . . . and when it was over, I was “gesneriad-less” for the first time in 15 years.
It was mind-blowing – like I was watching someone else toss the plants I had cared for and prepped for show.   Was it micronutrient toxicity?  Probably.  Was there a mite problem?  Probably not, but there was just enough doubt about that, that I felt that I had to take the advice I first read in Pauline Bartholomew’s Growing to Show, and that I, myself, have given to many, many growers:  When in Doubt, Throw it Out.

So many of you joined me on my original journey here, and I’m excited to be returning as your host for Season 3 – there’s more fun to be had!  Plus, it’s my guess that we’ll all learn something new in the process, and what could be better than that?

Ted Yoder in his Orchard

Ted Yoder’s music – in particular, his Moon on the Water – is such a part of All About African Violets that I can no longer separate them in my mind.  He’s been with the show from the beginning and was thrilled to continue as Season 3 ramped up.

Goshen, Indiana-based instrumentalist-composer-singer, Ted Yoder is widely considered “the Bela Fleck of the hammered dulcimer.” Though he’s a visionary artist in his own right, the comparison holds water in that Ted profoundly reimagined his instrument of choice, inventing a fresh musical vocabulary along the way—“Yoderizing”—and his virtuosity is boundless. His recorded body of work has garnered him plaudits from the jam band community, the folk scene, worship music fans, and music lovers of all ages. When he plays live, everyone becomes a fan.

Ted is a National Hammered Dulcimer champion. He’s released five beloved and critically acclaimed solo albums, and become a master educator of the instrument.
Ted has been profiled in the Kearney Hub, Huffington Post, and on NPR’s All Things Considered show, among many other features, profiles, and reviews in regional and national tastemaking outlets. On Wednesday, August 24th, 2016, Ted became something of a household name when a Facebook Live video of him from his Live From The Orchard series playing Tears For Fears’ “Everybody Wants To Rule The World” went viral. The video rocketed up to 53 million views in four days.

Ted’s CDs are available on his website, and also through iTunes, Spotify, Pandora, and Amazon.

About the Digital Dude 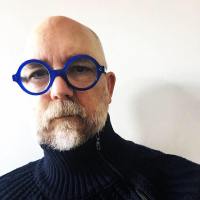 Douglas Brull is a visual artist, photographer, and designer of UX, interactive, and graphic design. He was a founding partner and the Creative Director of the award winning digital design studio Grandpa-George Design and Interactive (G-G Amalgamated) where he apprenticed over 65 young designers, as well as a former Director of Education for AIGA Minnesota.  Douglas is also a Design Professor Emeritus – retired. He currently splits his time between Minneapolis and Boston.

Douglas is  also a grower of African violets and a budding hybridizer.  Douglas’ Adventures in African Violets can be found at: Grandpubbah’s Great African Violet Adventure on Facebook.

How awesome stuff looks on this site is all thanks to him.

Kris “KniftyRed” Carlson is the person responsible for the logo for All About African Violets.  She’s also a gifted knitwear designer.